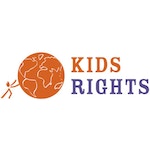 We are safeguarding children’s rights worldwide using tools like education and coordination.

Stichting KidsRights
#38710
Scan me or visit www.volunteerthehague.nl/o/Stichting-KidsRights1/opportunities/Spanish-translator/38710 to join

KidsRights has been working with children since 2003 on a world in which children's rights are guaranteed. Winning the International Children's Peace Prize offers young people a platform to make their voices heard and the opportunity to develop as positive and resilient changemakers.

Worldwide there are many talented young people with promising initiatives. KidsRights believes that all young people who want to make a difference should be recognized and supported in their incredible effort to improve children's rights. However small these initiatives may seem, the impact can be limitless with the right support and opportunities.

Our goal is to connect these young changemakers all over the world via a virtual platform. These changemakers can gain inspiration through this platform, receive support for their initiatives, promote them, and join other actions: The KidsRights Changemakers Movement.

Because the visitors to this virtual platform speak different languages, we are looking for volunteers who want to translate Dutch texts for a few hours a week. Just from home!

• You have a good command of the Dutch language

• You are a native Spanish speaker/writer

• You have a feeling for and affinity with writing

What are you going to do?

Translating Dutch texts into Spanish for the benefit of The KidsRights Changemakers Movement.

How much time does it take?

It won't be more than two texts per week, which equates to about 2-3 hours per week.

What does KidsRights offer you?

The possibility of reaching a worldwide audience with your texts and helping KidsRights achieve its goal; motivating more and more young people to become a changemaker and mobilize them around current children's rights issues. A volunteer allowance is available.

We are safeguarding children’s rights worldwide using tools like education and coordination.
See more opportunities by Stichting KidsRights
Volunteer vacancies you might also like
Organisation role · 4–8 hrs/Week
From home

Build with us! We are looking for a secretary who thinks in possibilities!

The Mebyf Foundation continues to develop as a strong organization. We are therefore looking for a secretary. Building something for you?Posted by Stichting Mebyf
Organisation role · Flexible hours
Flexible location

Interested in a board position, but you don't know where?

Are you interested in a fun board position? At PEP we know the organizations that are looking for board members, we are happy to help you.Posted by PEP Den Haag
Organisation role · 0–8 hrs/Week
From home

Our Foundation is in the establishment phase, and we are looking for a strong team player with excellent communication and interpersonal skills.
Posted by Terra Foundation
Organisation role · 4–8 hrs/Week
From home

We are looking for someone who has experience with building fundraising campaigns and building relationships with potential donors.Posted by Delft Maternity And Motherhood Assistance (Delft MaMa)
Organisation role · 2–8 hrs/Week
Flexible location

Will you help us with sponsoring for various korfball activities?

Help with creating sponsor packages and recruiting sponsors or advertisements for various korfball activities in the Hague Region.Posted by Stichting The Hague Korfball Masters