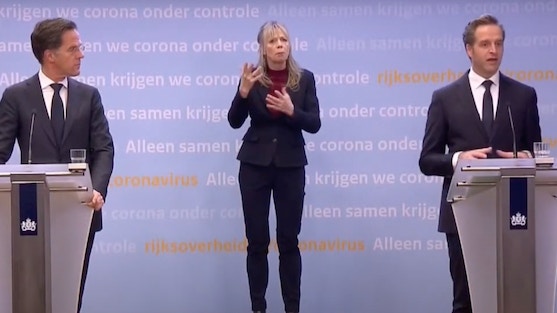 During a press conference watched by over 6 million people last night, Dutch Prime Minister Mark Rutte and Health Minister Hugo De Jonge gave an update on the state of the coronavirus pandemic in the Netherlands, the current lockdown measures, the curfew, and vaccination progress. It's widely been reported that the government and health officials are extremely concerned about the spread of new COVID-19 variants that have the potential to spread faster, increase mortality, and affect virus efficacy. Rutte confirmed this, saying that two-thirds of all new coronavirus infections last week were tied to the B.1.1.7 variant of the virus that originated in the United Kingdom. "The calculations point towards a third wave that will inevitably hit us [due to this mutation]," Rutte said. Because of this, the current lockdown will remain in effect until at least 2 March.

As was widely suspected, the government will be allowing primary schools, daycares, and special educations chools to reopen on 8 February after being closed for eight weeks, but there will be additional precautions. For example, if a primary school student tests positive for the virus, their entire class will have to quarantine and will be tested after 5 days. Educators will also get priority for rapid virus testing. As for secondary schools, those will remain closed until at least 1 March. A final decision about this will be made around 23 February after an assessment of the virus situation at that time.

There is still some question about what will happen with the curfew that has been in effect for the last couple of weeks - a curfew that sparked widespread riots in cities across the country. "We are seeing that it is quiet on the streets after 9pm. That is yet more proof that the vast majority of Dutch residents are honoring the rules," Rutte said. But being in effect for only 11 days, it is still too early to say if the curfew has helped bring down the infection rate, so it is still unclear if the curfew will end on 10 February as was previously expected, and Rutte said that he is waiting for recommendations by the Outbreak Management Team before altering or abolishing the curfew. Those recommendations are expected early next week.

After a steady decrease in coronavirus infections since a peak of over 12,000 new cases on 20 December, the average number of new infections hit a three-month low yesterday. Despite this good news, RIVM is estimating that 128 people will catch the viral infection from 100 people contagious with the B117 variant of the virus, which is still above the ratio they would like to see. For this reason, some of the easing of restrictions, such as the reopening of primary schools, was criticised by some viral experts, and not all members of the OMT felt it was safe to reopen primary schools. And one virologist told RTLNieuws, "The concerns about the British variant have not diminished or decreased. We do not see the consequences of that variant now because the current lockdown is working. But the question is, what happens when you lift that lockdown?” These experts fear a third intense wave of the virus could hit the Netherlands in March.

The only thing that will help with the spread is vaccinations, but the Netherlands has been widely criticised for its handling of the vaccination rollout. Not only was the Netherlands the last country in the EU to begin vaccinations, but with only 1.62 doses per 100 people given so far, they are also currently in the top 15 slowest countries in the world. De Jonge also said that he expects that the Netherlands will catch up to other European countries, "But we are, and this applies to the whole of Europe, dependent on the [vaccine] deliveries. We will receive considerably less than expected in the first half of this quarter, and in the coming months we must also prepare for disappointing deliveries." But it's not just the pace of vaccinations that are receiving criticism - De Jonge is also being criticised for allowing Pfizer's vaccine doses to be given as much as six weeks apart in order to increase vaccination rates. This is despite the fact that Pfizer is against that timetable and urges people to take the vaccine three weeks apart as originally recommended.

Finally, Rutte and De Jonge announced a new "roadmap" out of the lockdown, with one of the main changes being that the national government will take more control over determining measures in regions. Previously, each region took the lead when it came to determining restrictions.

Here is a full list of the current lockdown measures from the Netherlands government website, including the changes that were announced at yesterday's press conference: